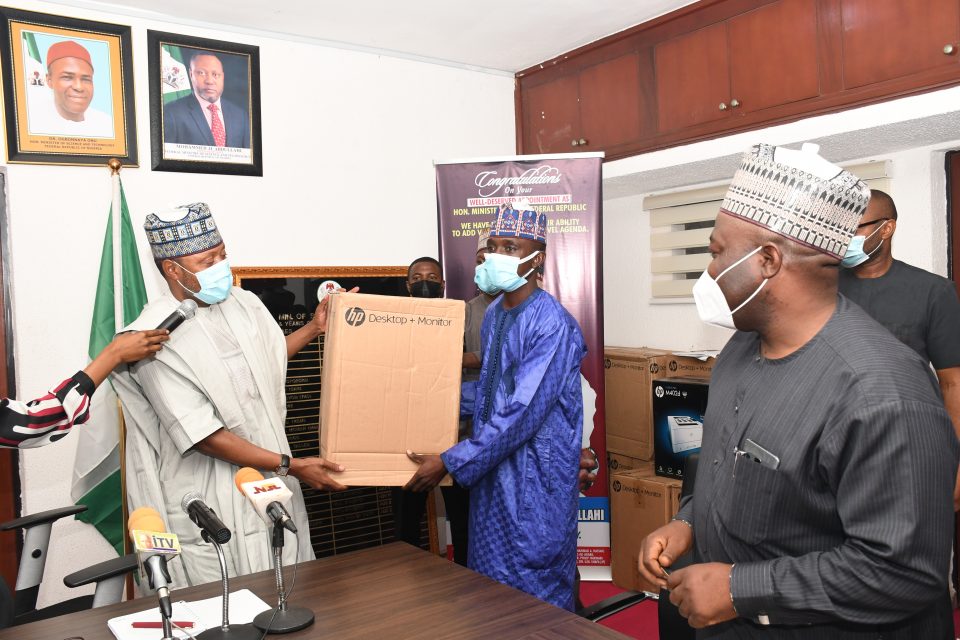 The Minister of State, Science and Technology, Barrister Mohammed Abdullahi, has presented two  science kits equipment and ten desktops systems to Nasarawa State Government as a gesture in support of Science Technology, Engineering and Mathematics (STEM) education in the State.

The presentation was made by the Minister in his office on Thursday in Abuja.

In a statement, Irondi Ifeoma, in a signed statement on behalf of the Deputy Director of Press and Public Relations, quoted the Minister in his remarks said the symbolic presentation of the science equipment is in fulfilment of the earlier promise made to science schools in the state, in respect to science subjects.

Abdullahi, further said that the equipment is meant to support the Children in Science Education, like Biology, Chemistry and Physics to boost their knowledge in Science, Technology and Innovation.

The Minister also said that the same gesture would be extended to science schools across the six Geo-graphical zones in the country.

He said the ministry through one of its agencies the National Board for Technology Incubation (NBTI) will support training teachers and students on computer technology and appreciation, adding that internet service centres would be provided to serve as jamb examination centres.

The Minister also called on the Nasarawa State Government to make sure the equipment are well protected and utilized effectively to enhance students’ capacity in Science Technology and innovation.

In his vote of thanks, the Permanent Secretary, Nasarawa State Ministry of Education, Science and Technology, Mohammed Sani Bala, thanked the Minister for his kind gesture on behalf of the State Government and promised to make sure the equipment is distributed accordingly.

Imperative of Science/ICT for Nigeria’s Development

Extraordinaire News4 days ago4 days ago