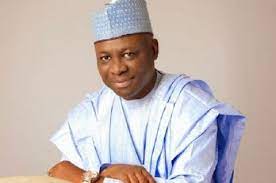 The Minister of Youth and Sports Development, Mr. Sunday Dare, has said federal government will not commit the Nigerian government and Nigerian athletes to a deal allegedly signed by the former AFN President, Engr. Ibrahim Shehu Gusau

He said he is yet to sight the contractual documents that ties Nigerian athletes to a five year contract with PUMA.

As is statutory, Dare said the Nigeria Olympic Committee (NOC) is responsible for Team Nigeria’s participation in the Tokyo Olympics, and President Muhammadu Buhari, represented by Vice President, Prof. Yemi Osinbajo, has formally handed over the team to NOC.

“Unfortunately, Gusau, as a former AFN President, did not write any official letter to the NOC about the kits neither did he contact the incumbent AFN Secretary General to take them over just as he did not remit them to the known address of the AFN, which is AFN Secretariat at the Moshood Abiola National Stadium, Abuja.

“He ran the PUMA deal as a purely personal enterprise, which landed him in trouble with the law.”

According to him, Engr. Gusau and his accomplices in the controversial PUMA deal were docked before a competent court in a criminal case with suit Number CR/99/2020 IGP versus Ibrahim Shehu Gusau and two others, for criminal conspiracy, misappropriation, criminal breach of trust and cheating in violation of the Nigeria Penal Code. The trial is ongoing and a copy of the charge sheet is attached to this statement.

It is pertinent to await the outcome of this criminal trial before making further clarifications on the extent of treachery that the disgraced former AFN President committed against the Athletics Federation of Nigeria and the Federal Republic of Nigeria, he added.

Mr. Mohammed Manga, the Spokesperson to the Minister, in a statement said: “The Attention of the Minister of Youth and Sports Development, Mr. Sunday Dare, has been drawn to a publication titled “Presidency Should Call Mr. Sunday Akin Dare to Order Before he Embarrasses Nigeria, By one Mr. Sylvanus Ofekun” which was published by Sahara Reporters and reproduced by a few other platforms that did not conduct the professionally expected due diligence on the false claims made in the said piece.

“The article was shopped to several national publications that turned it down on account of its misleading, libelous and attempt to fraudulently rewrite facts and information that have been in the public domain about the Athletics Federation of Nigeria (AFN).

“It is common knowledge that the former AFN President, Engr. Ibrahim Shehu Gusau with his co-travellers is desperate to extricate himself from a contract that he controversially signed the AFN into, which has now placed him in a position of trying to blackmail Team Nigeria into wearing the kits.

“Engr. Ibrahim Gusau has conveniently neglected to tell Nigerians that he and Sunday Adeleye signed a non-disclosure agreement with PUMA, which details are unknown to the Ministry and board members of the AFN. “

Deconstructing the Myth That Everyone Cannot Be an Entrepreneur